When I was looking for holiday recipes on Pinterest, I ran across this great recipe for gingerbread roll cake. I’ve never made a roll cake before, but I thought I would try making this for Thanksgiving, and it was a big hit. It would be great for Christmas too.

I know pumpkin rolls are really popular, but this is a gingerbread roll. I’m not going to lie and say this is really easy to make. If you are a beginning cook, you may not want to try this for one of your first baking projects.

Considering this was my first time making a roll cake, I don’t think it turned out too bad. The homemade whipped cream is a nice touch. If you are pressed for time, you could substitute Cool Whip instead for the icing, but it definitely wouldn’t taste the same.

Separate the egg whites and yolks. In a large mixing bowl, beat the egg yolks until they are thick and creamy, 2-3 minutes. Beat in the molasses, honey, and melted butter.

In another bowl, beat the egg whites with a mixer until soft peaks form. Slowly pour in the sugar and continue beating until firm peaks have formed.

Gently stir the egg whites into the egg yolk mixture.

Spread the batter into the prepared baking pan. Bake for about 10-11 minutes, or until the top of the cake springs back when you push on it with your finger. 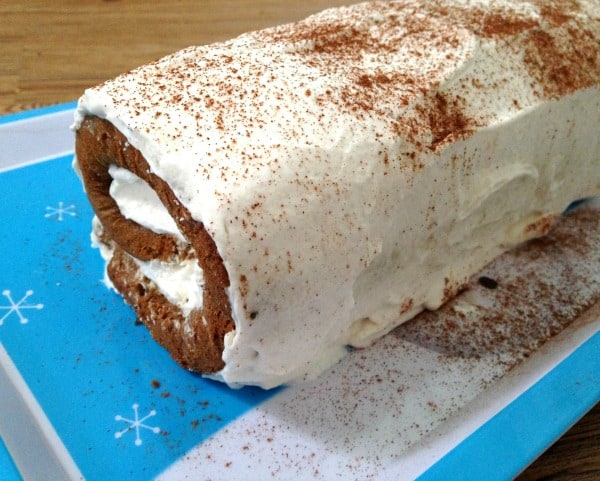 Very carefully turn the pan over on to the damp towel. Remove the pan and parchment paper.

Roll the cake up, starting at one of the short sides. Let the cake cool completely.

While the cake is cooling, make the filling. Beat the heavy cream, sugar, and cinnamon together until firm peaks form (homemade whipped cream…yum!!).

Although this isn’t the easiest cake to make, it is worth making at least once. You can’t beat homemade gingerbread and homemade whipped cream. Your holiday guests will be very impressed. It really is delicious.

Like this recipe? Try my recipe for cranberry orange pound cake.