No one needs tell a cat lover that cats hold Catnip in high regard. But cats aren’t the only ones that benefit from this common herb.It turns out that catnip has many uses.

Catnip is known as a kitty aphrodisiac. Bruising the leaves of Catnip releases the essential oil (specifically nepetalactone) which mimics cat’s sexual scents. The aphrodisiac effect on cats has been documented for centuries. In the 13th century a German herbal makes note of “Kattsmintte.”

Recently, Dr. Hinshaw endeavored to find if the effects of catnip essential oil was exclusive to house cats. He found through research at the Philadelphia Zoo that all felines; lions, tigers, leopards, lynx, etc., were all enticed by the herb and exhibited euphoric behavior.

A well-known homeopathic doctor, Dr. Millspaugh, gave up his medical practice to study botany prompted by stunning effects produced by herbs. His book documented many useful herbs including Catnip, noting favorable effects for humans as well as feline friends. 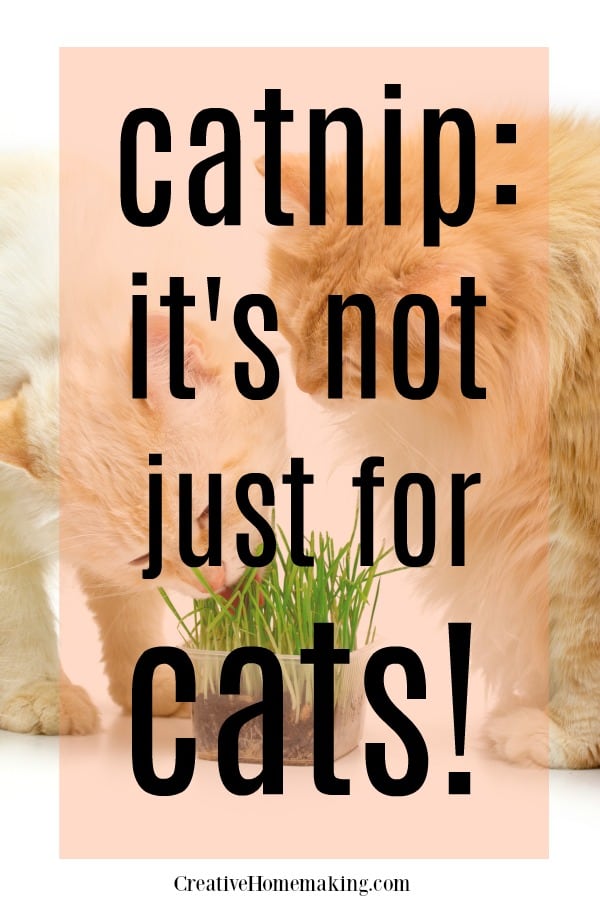 What Can I do With Catnip?

Sew a pouch large enough (approx. 3″x 3″) to accommodate 2 handfuls of herb. Tie or sew the pouch closed. Attach a ribbon or string to the pouch. Bob the pouch to watch kitty pounce. More creative sewers have made the pouch look like a mouse.

Medicinal and culinary uses abound because Catnip is high in Vitamin C, A, B (1,2,3,5,6,9,12) and Maganese among other nutrients. Catnip makes a tasty and healthful herb tea. Common uses for Catnip include tonic, stimulant, nervine, and antispasmodic.

For centuries, Mothers confidently use Catnip tea to reduce fever, as well as to remedy colic. Chefs include Catnip in meal plans from appetizers and salads to after dinner teas and treats. A gentle before meal tea acts to stimulate the digestive system and increase appetites.

Salad greens need not remain exclusively iceberg or romaine. A wild patch of catnip washed and torn will add a gentle yet wild flavor to an otherwise mundane salad. Though Catnip need not grow wild to add to your culinary repertoire. It readily grows in most gardens.

How to Grow Catnip

The Catnip plant grows easily in most gardens. It is a Perennial root that renews each spring. Leaves are thick, serrated, soft with heavy fuzz or down and heart-shaped. Originally European, Catnip escaped the confines of colonists’ yards and now grows wild across North America.

There are over 250 species of Catnip, with approximately 20 species readily available through nurseries and garden suppliers. Some of the most common Catnip are Nepeta cataria, N. tuberosa. N. racemosa, N. nervosa.

The first year I grew catnip, I transplanted the root in the early spring. It grew to a foot tall by late summer when I harvested the leaves. The second year, catnip renewed itself early spring, being one of few plants to green early after the winter’s freeze. It grew to about the same height, but I harvested twice that summer. By the third year, catnip reached its full height 2 – 2 ½ feet. It has propagated to fill in the boarders of the bed.

Catnip, a summer bloomer (in colors from white to purple) attracts all sorts of positive insects to a garden from predatory eaters to pollinators.
Hummingbirds often frequent gardens with Catnip blooms. While there are some insects that attack Catnip, they seem rare. However, cat owners need guard Catnip from cats in the garden. Felines are known to tear the little shrub to shreds, purring all the way!

Steep. Add the juice of one lemon slice. Sip as needed. Use to produce hot sweat with colds & flu.

1 tsp. mixture to 1 cup of boiling water. Pour over the tea. Cover the cup. Steep for 10 minutes.

White of one egg
Juice of 1 Lemon

Stir together. Prepare a plate with sugar. Dip fresh Catnip leaves in the egg/lemon mixture. Set the leaf on the plate. Turn the leaf over to pick up sugar on both sides. Set the leaf aside to dry, about an hour. Store in an airtight container in the refrigerator.

Morning In The Garden Tea

1 tsp. mixture to 1 cup of boiling water. Pour over the tea. Cover the cup. Steep for 10 minutes.